Divertissement: Chagall at the Met

For many people, especially first time visitors, the Marc Chagall paintings are an integral part of the MET experience. They draw one in from across Columbus Avenue and look just as majestic as one walks along the Mercedes Bass Grand Tier inside the opera house. It is surprisingly hard to find information on these masterpieces which have graced the (new) Met since its opening in 1966.

In 1964 the Met commissioned Chagall to paint two gigantic murals to be hung in the lobby of the new Metropolitan Opera House at Lincoln Center. In addition, they also asked him to design the sets and costumes for their new production of Mozart's "Die Zauberflöte" to be presented in 1967. So besides his two murals, Chagall also created 13 large curtains, 26 smaller curtains and 121 costumes and masks for the Met.

It was no surprise that an artist like Chagall was chosen to create the Met's new masterpieces.  Chagall had a long relationship with the performing arts.  In 1942 he was asked to design the sets and costumes for a new ballet by Leonid Massine called "Aleko."  This was followed in later years by costumes and sets for Stravinsky's "The Firebird" and Ravel's "Daphnis and Chloé."  Most recently, he had painted a new ceiling for the Paris Opéra, commissioned by André Malraux, the French Minister of Cultural Affairs.

Chagall painted the murals in his studio in Paris and had them shipped to New York once they were finished.  Rumor has it the paintings were hung before the façade of the Met was finished. This is the same way the giant sculptures at the David H. Koch Theater made it inside. The Elie Nadelman sculptures were placed on the promenade before the final wall of the theater was erected.

As mentioned, Chagall's collaboration was not limited to just these two paintings.  At the same time he also designed the Met's new production of Mozart's "Die Zauberflöte." Maybe because of this there are several references to Mozart in "The Sources of Music." If you look closely, you can see he took several figures from "The Sources of Music" and used them in an ad poster (entitled Main Poster) for the Magic Flute.  The figures are actually a group of animals which correspond to the characters in the opera.

As with many of his works, the paintings get their inspiration from the Bible. Chagall loved portraying images from the Bible throughout his career. The five characters in his poster are set in the Garden of Eden, and throughout his designs he tried to draw the paralells between the Bible and Mozart's opera.  To him, they both shared the fundamental principles of goodness and truth. “For me there is nothing on earth that approaches those two perfections, “The Magic Flute” and the Bible,” he said. 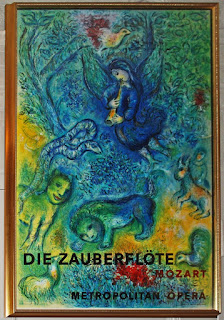 The 1967 production of "Die Zauberflöte" was a great success.  A Times Herald review by Speight Jenkins Jr. described it as such:

"All I had heard around the Metropolitan in the weeks preceding the premiere boded ill for the multi-colored, fanciful, way-out sets and costumes designed by the famous artist, Marc Chagall. Every bad rumor was wrong. From beginning to end, the welter of color created the non-realistic landscape which is the domain of "Zauberflöte."

The colors and Chagall's use of them defy description. Basically the action is played on a central disk. The only props are those required by the libretto, such as the tree on which Papageno attempts to hang himself. The color derives from a countless succession of backdrops which, along with side drops, indicate the change of scene. The animals in the "Flute" dance on with Chagall-ian double heads and cavort about the stage in an incredible manner. A reservation on the costumes: they are, except for Papageno's, over-colored."


Chagall's Magic Flute would be replaced in 1991 with a new production by David Hockney.  However, his paintings will forever grace the walls of the Met.  If you stroll along Lincoln Center on a sunny afternoon, do not despair when you don't see them.  They are just covered by giant curtains to protect them from the sun.