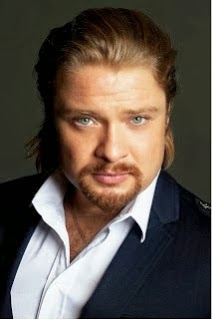 Aria choices for the Region Finals (subject to change)

Opera Idols: Tell us a little bit about yourself.
Viktor Antipenko: I grew up at the famous Glinka Choral College in St. Petersburg. The school gave the world such great musicians as Vladimir Atlantov, Evgeny Mravinsky, Konstantin Simeonov and many others.

At first I was studying conducting, but I loved singing from the first grade. As a member of the well known Boy's Choir of the Glinka Choir College, I learned all about performing during our tours in Russia, Germany, Austria, Slovenia, Croatia, Switzerland and the rest of Europe. As a descant (boy's soprano), then alto, and finally tenor after my voice changed, I performed almost all existing chamber repertoire. When I was in the sixth grade as an alto soloist, I recorded Prokofiev's On Guard for Peace under famous Russian conductor Yuri Temirkanov.

OI: When did you know you wanted to become an opera singer?

VA: Right after my graduation from Glinka Choral College I was invited to join the Mariinsky Opera Chorus. And yes, here I extended my views about singing in a choir. For five years I was combining my studies at the St. Petersburg State Conservatory as a conductor with my job at the opera. Upon my graduation I clearly knew what my passion was. I fell in love with this profession - opera singer! I remember my first show at the Mariinsky Opera, Le nozze di Figaro; just a few measures of singing with acting dressed as a woman... Theater, it can be really fun!

During my time at the Mariinsky Opera I memorized over a hundred operas and performed in top opera houses around the world, including Covent Garden, NHK and Wiener Staatsopera. I even got to experience the feeling of being on the MET stage as the Mariinsky brought its Ring Cycle to the MET in 2007 and I sang in the chorus of Wagner's Götterdämmerung. By the age of 23 I was still a chorus member but I was already performing small roles with Maestro Gergiev. However, at one point it was time to make a difficult decision.  I decided not just to leave the chorus, but also to leave this great stage with more than 200 years of history! It was the stage where I grew up as an artist, where I was performing with the stars, where I was already successful at some level. But I understood that if I wanted to sing the solo roles of my dreams I must create a new person. I needed time for coaching and voice lessons; and taking responsibility for my job and making my own mistakes. This is what brought me to another famous place - the Academy of Vocal Arts in Philadelphia.  Here I was able to focus on my goals.

VA: I have to wait a couple of years before I perform Pagliacci and Gherman, but one dream has already become reality.  Last season I made my debut as Don Jose at the Bolshoi State Academic Theatre in Moscow (the Bolshoi Opera). What a role; what a passion! After this successful debut I was invited again, so last October I made my second debut. I sang four performances of Erik in a new production of Der fliegende Holländer directed by Peter Konwitschny.

My current dream role is pretty simple: to sing a Russian role. I have received invitations to sing in German, Italian, French and English, but I have not had a chance to sing in my native language. I would love to bring the Russian passion to the audiences and let people see it in the correct way. The role of Lensky in Eugene Onegin would be the top of my happiness right now. I'm saying "now" because we're all transforming as a person, singer, actor... And while I am still young this role is a perfect match. In 10 years time? Who knows, maybe Otello...

OI: What performances do you have coming up?

VA: I will be performing Don Jose in Carmen at the Bolshoi Theater in Moscow on March 6th and 8th, 2014.
Posted by Unknown at 9:46 AM