A little piece of history

Fifty years ago, two hundred thousand people gathered at the National Mall in Washington DC on the steps of the Lincoln Memorial.  It was the March on Washington, a day in which activists and the general public tried to persuade Congress to pass the stalled Civil Rights Act and a day to highlight the economic and political difficulties faced by the African-American community. The day culminated in the infamous 'I have a dream' speech, made by Dr. Martin Luther King on the steps of the Lincoln Memorial.


The day was a harmonious event, attended by both blacks and whites, and filled with speeches, songs and prayers by leaders in the political, entertainment and clerical world.  One such entertainer was Marian Anderson, the world famous contralto (the lowest voice type for women).  She performed 'He's got the whole world in his hands', but arrived too late to perform the scheduled National Anthem.  Her place was taken by Camilla Williams.

For Anderson, this performance must have brought her
back to 1939 when she first performed on the steps of the Lincoln Memorial. That day, seventy-five thousand people attended the Easter Sunday Lincoln Memorial Concert.  Her performance was surrounded by controversy, one of which I was reminded of Tuesday when I visited the FDR Library in Hyde Park, NY.  The following letter written by First Lady Eleanor Roosevelt was on display: 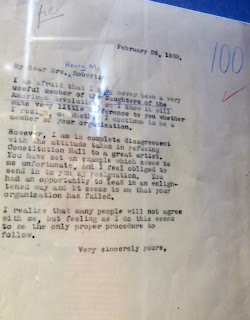 I am afraid that I have never been a very useful member of the Daughters of the American Revolution, so I know it will make very little difference to you whether I resign, or whether I continue to be a member of your organization.

However, I am in complete disagreement with the attitude taken in refusing Constitution Hall to a great artist. You have set an example which seems to me unfortunate, and I feel obliged to send in to you my resignation. You had an opportunity to lead in an enlightened way and it seems to me that your organization has failed.

I realize that many people will not agree with me, but feeling as I do this seems to me the only proper procedure to follow.


The events preceding this letter were as follows.  Marian Anderson, born in 1897 in Philadelphia, had become a great success in Europe throughout the thirties.  She performed all over the continent to great acclaim without any of the racial prejudices she was to encounter in the US.  Several European opera houses offered her roles, but she declined them due to, what she felt was, her lack in acting experience.  In 1934 she caught the eye of Sol Hurok, who became her manager for the rest of her life and who convinced her to return to the United States.  Despite making great strides in America, her biggest popularity still lay in Europe.  "Marian Fever" was present all throughout Scandinavia, and Toscanini proclaimed she had a voice "heard once in a hundred years."

Then, in 1939, Anderson was denied a performance at Constitution Hall in Washington DC.  Even though the reason given was a prior engagement, it quickly became clear the problem lay with the D.A.R,  the Daughters of the American Revolution, who owned the hall. They had a policy which prohibited African- Americans from performing.  And this is when Eleanor Roosevelt resigned from the D.A.R.  She did not leave it at that, however.

She had always been a staunch supporter of Marian Anderson, inviting her to perform at the White House in 1936.  With the support of the Roosevelt administration, Sol Hurok was able to persuade Secretary of the Interior Harold Ickes to set up a concert on the steps of the Lincoln Memorial.  This concert became known as The Lincoln Memorial Concert held on Easter Sunday 1939.

The program that day consisted of the following and can be heard here.


The Lincoln Memorial Concert was a great triumph for Anderson, and in 1943 she was allowed to perform on the stage of Constitution Hall at the invitation of the D.A.R to raise money for the American Red Cross.  Another major breakthrough happened on January 7th, 1955.  Anderson took on the role of Ulrica in Verdi's 'Un Ballo in Maschera' opposite Zinka Milanov as Amelia at the Metropolitan Opera.  She had been invited by the Met's General Manager Rudolf Bing and so became the first African-American to perform on the Met stage.  Anderson remembered the evening as such:

"The curtain rose on the second scene and I was there on stage, mixing the witch's brew. I trembled, and when the audience applauded and applauded before I could sing a note, I felt myself tightening into a knot." 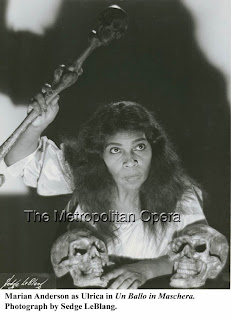 After the conclusion of this production, Anderson never returned to the Met stage. She was named a permanent member of the Met, however, and was present on stage as an honored guest on April 16th, 1966...the Farewell Gala to the old Met.