Divertissement: Swarovski at the Met 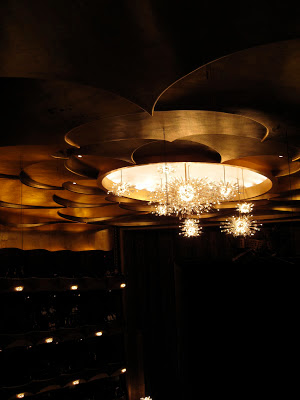 If you walk along Lincoln Center Plaza on a hot summer day, one is struck by the tranquility. However, just like in opera, this stillness is just an illusion. The MET backstage is buzzing with activity, from the carpenters who are busy building the sets for next season, to the cleaning crew who does a thorough 'summer' polishing of the Met.

Once a year, the famous starburst chandeliers are brought down for a thorough cleaning. At the same time, all the burned out lights are replaced. Until 2008, this was the only cleaning the chandeliers had received since 1966, when they were first installed.

The chandeliers were a $160,000 gift from the Austrian government as a thanks for the American aid the country received after WWII. They were a collaboration between two companies who were no stranger to majestic chandeliers. J & L Lobmeyr, founded in 1823 and owned to this day by the Rath family, designed and installed the chandeliers. They have made pieces for the Kremlin, Salzburg Opera and Vienna State Opera. Then there is Swarovski, another family owned Viennese company founded in 1895. Among others, they made the 14 meter tall chandelier in the Sultan Quaboos Grand Mosque in Oman.

After the Austrian government made the gift, Hans Harald Rath (owner of Lobmeyr at the time), came to NY to discuss the design of the chandeliers with Wallace K. Harrison, the Met's architect. Rath was given free reign, but it was quickly decided the chandeliers should be able to move up and down to mimic the movement of the curtain. Rath's first idea was not received very well, so Harrison gave him a book on the big bang theory for inspiration.


The 32 chandeliers consist of 1000 wood and metal spheres called Sputniks, after the Soviet satellites, which hold them together. The metal rods, known as rays, reach out at different angles from the Sputniks and hold the Swarovski crystals in place. Twenty-one of the chandeliers are located in the auditorium, including the 18- foot masterpiece which weighs 1.5 ton. Eleven chandeliers are located in the lobby and Grand Tier restaurant, together with 138 wall scones. There is also a chandelier in the Opera Club, which was restored in 2006.

This started the process of refurbishing and refinishing the eleven starbursts in the lobby in 2008, getting them ready for Opening Night of the 125th season. They were packed in eighteen crates and shipped to Vienna, where Swarovski replaced the 49,000 pieces of crystal. Swarovski donated the crystals and funded the $1 million restoration project led by Lobmeyr. The original crystals, which are now for sale in the MetOpera shop for a price of $7000 to $16000, were cut by hand. This time around, they were cut and polished by machine, which makes them appear even more brilliant.

Forty-seven years have not diminished the awe-inspiring effect of the chandeliers, but their biggest tribute came on September 16, 1966 as the new Met opened its doors for the very first time. The first ovation in the house reportedly came when the chandeliers rose to the ceiling for the very first time.  No matter how often one goes to the Met, it is always a thrill to see the chandeliers go up.  It is as much a part of the Met experience as taking a picture of the Chagalls or looking over Lincoln Center Plaza from the Grand Tier.