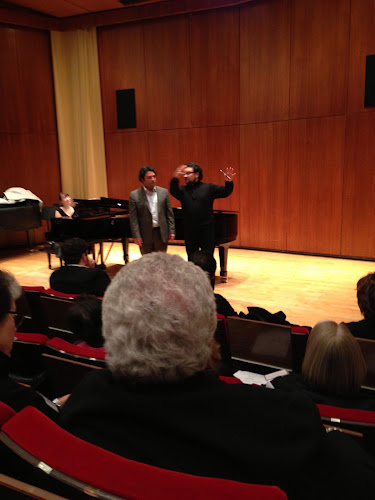 I have always heard about Master classes, from Maria Callas to Renée Fleming, and today it was Ramón Vargas's turn as he infused three Lindemann Young Artist Program tenors with his wisdom and talent.  I was very excited to attend my first Master class and I was not disappointed.

This event took place at List Hall at the Metropolitan Opera. Mr. Vargas has been a regular at the Met this past month as he is singing the title role in Verdi's Don Carlo. I saw him set the stage on fire last week not only with his amazing voice, but also with the camp fire he lit in Act I. It did not occur to me that this fire was raging out of control, but a Met Stage Hand did run on stage to extinguish the blaze with a fire extinguisher.

Mr. Vargas took it all in good stride, and his good humor came through in today's Master Class as well as he made all the singers feel comfortable and welcome. He started by briefly discussing the three characteristics of good singing (which is subjective, as he explained, because singing is all about subjectivity...and parameters):

As throughout the whole class, Mr. Vargas used several metaphors to get his point across. They were not only very helpful, but also very entertaining as the crowd erupted in laughter. One of the metaphors he used was that of a baseball player; the power is not the only important aspect of a good baseball player, but he needs much more than that.

Three singers took the stage as Mr. Vargas took notes and then advised the singers on how to improve. It was remarkable to watch the transformation right in front of our eyes as he told them about pronounciation, acting and the context of the arias.  A Master class is not only great for the singers, but it seems a very good way for someone who knows nothing about music (I mean myself) to learn a whole lot more about it.  I listened to the singing in a different way and I could tell the difference after each piece of explanation.

Mario Chang, Anthony Kalil and Andrew Stenson each performed one aria. Mr. Vargas emphasized the importance of knowing the role. As an example, when critiquing "De miei bollenti spiriti" from La Traviata, he told the story of how happy Alfredo is that he has found the most beautiful woman in Paris. This has to show through in the way a singer presents himself on stage. It is also important to keep in mind what the composer wanted to happen.

He also said a singer should not push himself too hard when singing. A voice is like a beautiful woman, if she puts on too much make-up it might have an adverse effect and beauty disappears as more and more effort is put in. It is important to relax the voice and relax the vowels.

Mr. Vargas concluded the class by reminding everyone that the most important element is passion. You have to sing because you enjoy doing what you are doing.  And this, as I have found out, applies to anyone whether they are a singer or not.
Posted by Unknown at 10:16 AM