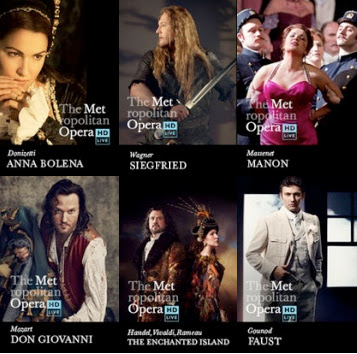 According to the Associated Press, the Met has sold ten million tickets to its Live in HD performances over the course of six years.  You can read the full article at CBS.com.

The broadcasts are an amazing way to make opera accessible to millions of people all around the world.  All Live in HD performances are filmed and send across the globe during the Saturday Matinee performances at the Met.

Even if you have the chance to see a performance live at the Met itself, seeing a production a second time on the big screen (or the small screen if you tune in to PBS) only adds to the enjoyment.  There are so many details you can see that you would miss even if you were sitting in row A of the Orchestra.  Of course, broadcasting a live performance in HD comes with its own set of challenges, including close-ups, make-up, decor, wardrobe... For example, while the singers' gestures must be grand to project all across the opera house, they are not supposed to be that 'big' to be seen by a camera taking a close-up.

As I was volunteering at the Met last year on a Saturday afternoon for the Live in HD performance of 'Le Comte Ory' with Juan Diego Florez, the performance was delayed.  Delays are never good, but they are even worse if viewers all across the globe are sitting in their local movie theaters, waiting for the show to begin.  While we enjoy the show in the afternoon, in Europe and Asia, for example, it is already evening.  The performance started soon after with an introduction by Renée Fleming who announced the reason for the short delay: Juan Diego Florez's wife had just given birth to their first child at 12.25pm.  After holding his son for a few minutes, he rushed over to Lincoln Center so he could become the Count Ory around 1pm.  This is the thrill of live theater; the joy was evident on his face throughout the whole performance.  Luckily, Le Comte Ory is an Opera-Comique.

The program has been going on for six seasons now, and if you have never seen a Live in HD movie, don't forget to check out the Met's website for a list of upcoming encore showings.  In May, an encore will be shown of all 4 parts of Wagner's Ring.  The run will start on May 7th with a new documentary by Susan Froemke, called Wagner's Dream.  She produced and directed The Audition Documentary in 2010, a great documentary on the National Council Auditions.