Met Scene: Behind the curtain of the Ring 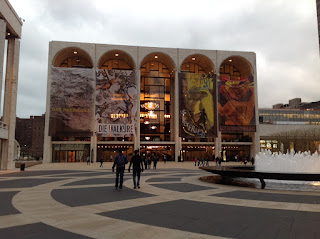 There are things that we take for granted; things we assume have always been this way because it is the only way we can remember it ever being.  Richard Wagner was once quoted as saying:


"Even if I know I shall never change the masses, never transform anything permanent, all I ask is that the good things also have their place, their refuge."*

As it turns out, Wagner did change the masses and made permanent transformations.  Opera houses, theaters and even cinemas today look the way they do because of him.  In the (really) old days, opera houses were build in horse shoe shapes, did not have a raked auditorium and performed with the lights on in the opera house.  It was a social scene, where people looked at each other and gossiped about clothes and jewelry.

Wagner was a difficult man, and he wanted people to only have eyes for his music.  For him there was only one way to do that: build his own perfect opera house.  He changed the shape of the house, raked the auditorium and turned off the lights during the performance.  This wooden structure stands to this day in Bayreuth, even though his first idea was to burn it down after the performance of the Ring Cycle.

I have always felt that the Ring is not a great choice for a first opera, but I changed my mind after listening to a lecture by William Berger.  The lecture was held in one of the rehearsal rooms at the Met for members of the Young Associates, and Mr. Berger spun a riveting tale.

He seems to know all the things about opera I wish I knew.  He has written several books on the subject, writes articles for the Playbill and is the producer of the Met Radio Broadcast.  I love taking notes, so I had a great time taking in all he had to say this morning.

Mr. Berger thinks the story of the Ring is quite simple and can be explained in just one minute.  I would not have believed this, but he did make me realize it is possible.  Wagner was an amazing story teller, and the reason the Ring is fifteen hours long is not because he had no idea how to tell the story, but simply because that is how long the story takes to be told.

Wagner got his inspiration for the Ring from two sources: old Germanic myths and Icelandic myths.  He started with the ending (Götterdämmerung) based on the Germanic myths and worked his way backwards.  When you finish watching the Ring it all makes sense, and you can tell he knew all along where he wanted the story to go.  Even though the Ring is made up of four different operas, if you see them all they will become one whole.  They are after all the largest single piece of music performed today.

The slow development of the story is actually an advantage, and is just what Wagner wanted to achieve.  He did not intend this opera to be performed the way it is today, with people rushing over to the opera house after work and expecting this to be a piece of entertainment.  You need to be swept away by this (and believe me, you will).  The advantage of the slow story is that you perceive all the subtleties and nuances you would only discover in Puccini's work after having seen it thirty times, just because it moves along so fast.

Wagner had a vision for the Ring, one that took him twenty-seven years to achieve (both in funding and writing).  He wanted to re-recreate the reason that opera came about in the first place: to recreate the great drama of Greek theater.  This idea started during the Italian Renaissance, but since no one knows what Greek music sounded like, this was open to interpretation.

Wagner is just as relevant today as he was a hundred and fifty years ago.  He changed the way music evolved, how we watch and listen to it and even how we tell the story.  You can find his work in many unexpected places.  Mr. Berger pointed the attention to a Levi's commercial which uses the first two minutes of music from Das Rheingold (and so from the whole Ring).  This first part is an E-flat note which lasts for four minutes, one single note which tells the whole story: the evolution from chaos to culture.

* Brainyquote.com
Posted by Unknown at 7:00 AM