Nail-biting at the Grand Finals Concert


Eight months ago about two thousand young opera singers all over the United States went out for their first audition (the District Auditions) on their path towards the Metropolitan Opera stage.  Here in the Eastern Region we went from seventy-five singers to ten singers; then to two singers at the Semi-Finals until only Will Liverman remained as he sang on the Met stage as a National Council Grand Finalist this past Sunday March 18th.

The Grand Finals as they are known today have only been around since 1999, but they are immensely popular.  Way back in November as I was waiting in line at the box office, people were queuing to buy tickets to the Grand Finals because they had just received the announcement in the mail.  The opera house was buzzing with excitement as almost all of the four thousand seats were filled with opera lovers and family members of the singers.

After rehearsing and coaching at the Met for a week all nine finalists were ready to take the stage at 3 PM on Sunday.  The program started with an introduction by Eric Owens, whose deep voice delighted the whole audience.  It is one thing to hear an opera singer perform, but to find out that their talking voice is just as musical is a great surprise.  Each singer performed one aria and if the audience enthusiasm was any indicator, there were definitely some favorites from the get go.  Will did an amazing job with his first aria: "Batter my heart" from Adams' Doctor Atomic. Afterwards I heard many people comment on how they loved his aria choice and what a wonderful rendition he delivered.

After a 15 minute break, where audience members enthusiastically discussed their favorites, the singers came back for their second aria. The most popular composer of the day seems to have been Mozart, and Will jumped on the bandwagon as he performed 'Papagena! Weibchen! Täubchen!' from Die Zäuberflöte (The Magic Flute).  He sure made an entrance bringing the house down: as conductor Andrew Davis started the music, Will ran on stage, his flute around his neck in order to find Papagena.

As the judges deliberated, audience members were entertained by General Manager Peter Gelb and bass baritone Eric Owens.  Peter Gelb discussed some tidbits on the Metropolitan Opera House which drew lots of laughter, but he also made a very interesting and serious point.  Even though there are hundreds of singers on the Met stage who won the Grand Finals, there are just as many who participated in the Auditions and never won but still have a career with the Met, like Patricia Racette.

Eric Owens himself was a winner of the Grand Finals in 1996,  but he did not make his Met debut until 2008 in Dr. Atomic.  This season he is a Met favorite in the new Ring cycle, playing the role of Alberich in Das Rheingold, Siegfried and Götterdämmerung.  I have seen him in all three performances, and I must say I could barely recognize him as I chatted with him at the reception afterwards.  He finished the singing part of the program as he performed 'Elle giammai m'amo' from Verdi's Don Carlo.  I am sure they picked the longest aria they could find to give the judges some extra time, but it was beautiful. 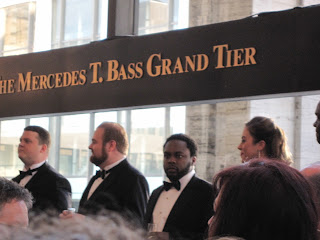 The judges are of course very experienced, and can make a good judgment call in a short period of time.    Today's judges were Sarah Billinghurst (Assistant Manager, Artistic Metropolitan Opera), Jonathan Friend (Artistic Administrator Metropolitan Opera), Gayletha Nichols (Director National Council Auditions Metropolitan Opera), Craig Rutenberg (Director Music Administration Metropolitan Opera) and Joshua Winograde (Artistic Administrator Los Angeles Opera).  As soon as Eric Owens finished singing he came back on stage to announce the winners.  Check out yesterday's post to see a full list of winners.  Of course I was hoping Will would win, but I am glad my number two won, Margaret Mezzacappa.  She definitely stirred some emotions in me as she sang "O ma lyre immortelle" from Gounod's Sappho.  A concert like this is definitely a great place to discover some lesser known arias.  If you want to find out more information about all the singers, please check out the program of the day.

Even though Will did not win, he is a winner to all of us here in the Eastern Region.  He was very excited and happy as I chatted with him afterwards.  At twenty-three, he was the youngest Grand-Finalist this season, and he has some exciting times ahead of him.  He told me he is going to Chicago this weekend to find an apartment as he will join Chicago's Lyric Opera Ryan Opera Center in April.  Be sure to check back often as we will have much more to write about this talented singer in the coming years. 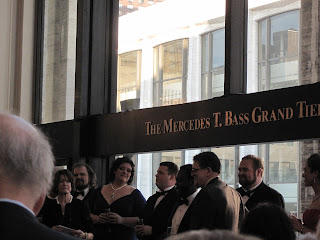 Each Grand Finals Concert is concluded by a reception at which all singers receive their prize.  Will received $5000 together with the other three Grand Finalists, while the five winners received $15,000 each.  All prizes were handed out by the person who donated the award money.

I tried to take some nice pictures of Will receiving his award, but it was a tough crowd and this was the closest I could get.  I must thank the one lady who told me to just push everyone aside so I could get my shot.  The stars of the day were of course all the singers, and patience was needed if you wanted a chance to chat with them and congratulate them.

Ryan Speedo Green attended the Auditions this year as an audience member and not as a participant (he won last year), but he was quickly recognized by the crowd as he left the opera house.  You may remember him from our Gala where he performed, and it was nice to catch up with him as well.  At the time of our gala he knew he would be performing during the 2012-2013 Met season, but he did not know which roles yet.  He told me today he will be performing in Turandot and Parsifal.  There were many more familiar faces in the audience, including Ricardo Rivera and other ER competitors who came to cheer on their colleague.

As the performance was about to begin I received an application for our new season of auditions, and we have not even officially started yet.  People are very excited about this program and can't wait to be a part of it.  I love the enthusiasm all the singers have for their art, and I can't wait to start again.  It never hurts to keep trying as well, because the first remark Eric Owens made at the reception was that he participated in his local District Auditions three times before he was able to move on.  I think never giving up is the best lesson to end the 2011-2012 season of the Metropolitan Opera National Council Auditions.
Posted by Unknown at 6:30 AM