A day at the Met: L'Elisir d'Amore 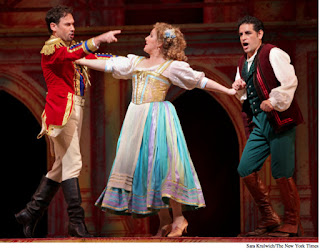 If I were an opera singer, my dream role would be Adina in Donizetti's L'Elisir d'Amore.  I would be living on a picturesque farm in a 19th Century Italian village.  I would have a suitor, Nemorino, whom everyone sees as a little 'slow', but who is actually very genuine and sweet.  He is the exact opposite of my second suitor, Sergeant Belcore, who has just arrived in town with his men and immediately asks for my hand in marriage.

Judging by the name of this opera, I am sure you can guess where the story goes from there: traveling salesman (Dulcamara) arrives in town and sells Nemorino a love potion in exchange for his last cent.  The love potion doesn't work fast enough and Adina decides to marry Sergeant Belcore the next morning.  Nemorino buys more love potion, but in order to afford it, he has to enlist in the army in order to get more money. Then Nemorino's uncle dies, leaving him an inheritance and all the town's girls fall in love with him.  Adina gets jealous and realizes she does love Nemorino after all.

I have seen this opera twice before, but none of those performances were as memorable as the one I saw last Monday night at the Met.  A lot of it had to do with the cast because I had seen this production, by John Copley, once before.  It didn't impress me back then, so tonight was a revelation.  It is, however, one of my favorite operas as it has beautiful music.  I like something with a lot of melody and happiness in it, and L'Elisir certainly fits the bill.

'The Elixir of Love' is a melodrama giocoso, which translates as a playful melodrama.  It is one of Gaetano Donizetti's biggest successes, and he composed it in 1832 in a six-week period, making changes up to the last minute.  In Italy, where the opera had its premiere, it was the most often performed opera between 1838 and 1848.  Then again, during that period, one out of every four operas performed in Italy was one composed by Donizetti.

The last few years the opera has always been a great success as well, and the Met is premiering its brand new production by Bartlett Sher on Monday September 24, 2012 as the Opening Night of the 2012-2013 season.  Anna Netrebko and Matthew Polenzani star in the title roles.

Nemorino's underdog role has always been one to bring fame and fortune to singers.  It was the role that jump-started Enrico Caruso's career.  Ever since he received overwhelming applause during his performance on March 17, 1900 at La Scala, his name has been synonymous with Nemorino.  He would repeat his success at the Met over a course of ten seasons, and up to this day people still listen to his rendition of 'Una Furtiva Lagrima.'  The same goes for Luciano Pavarotti.  'Una Furtiva Lagrima' is one of my favorite arias of the opera and is one you will recognize even if you have never listened to opera before.  Another aria I like is 'La Nina Gondoliera,' which is hilariously funny, especially if you read the translation with it.

Even in opera there is such a thing as typecasting, and Juan Diego Flórez, who plays Nemorino in this season's production, is a perfect example of that.  Every role I have seen him in at the Met has been a comical one.  I first saw him in La Fille du Régiment, where he was crowned the king of high C's by the New York Times.  He is a great Bel Canto singer who has a very sweet and easily recognizable voice, and I just love to listen to him.  Of course, he is also nice to look at and he is a great actor.  If you are actually watching a performance in an opera house, I find the acting almost as important as the singing.

Even though this opera is a hoot to watch, it is a killer to sing.  Last week's cast had the ability to make it look easy, but you need to have amazing control to make this difficult coloratura (the embellishment) look easy.  Diana Damrau as Adina was able to do that as well.  She made it look so easy and real I just wanted to get up and go dance with them on stage.

Another favorite of mine was Mariusz Kwiecien, who played Sergeant Belcore.  Needless to say, I liked everyone.  I am so glad I went to see this production one more time before it disappears in a few weeks.  I hope you will do the same, because it will brighten your day...and your week.
Posted by Unknown at 6:30 AM