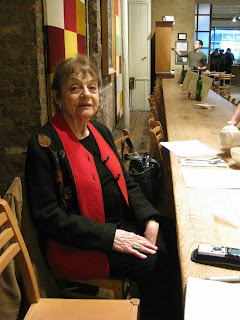 Opera Idols:  How did you become interested in opera?
Betty Reiser:  I have been interested in all types of music for most of my life.  Initially I sang in choral groups at school and in the community.  I had a good voice, but untrained.  My interest in opera developed gradually as I was exposed to it as an adult.  I did not grow up with it as part of my musical experience.  I came to love it as I had opportunities to see and hear more of it.  What I find so fascinating about it is the total experience of singing, acting, staging, scenery, costumes, etc.

OI:  What kind of singing did you do?
BR:  Primarily the serious choral works of Bach, Mozart, Faure, Handel, etc.

OI:  In New York?
BR:  Some, but mostly in Westchester County where I lived for many years.

OI:  Do you still sing now?
BR:  Mostly for myself.  I was a soprano.  As I have gotten older, my upper notes have diminished.  I can no longer reach them easily.  When music is in my mid range I do sing, but generally for myself.

OI:  What stopped you from becoming a professional singer?
BR:  I did not grow up in a family where music/the arts were considered an important part of our lives.  Nevertheless, I was drawn to singing and acting and I tried in my way to seek out and participate in opportunities that helped me to expand my horizons.  It was when I became an adult with more resources that I began to explore and develop these interests.

OI:  You watched the singers from the District Region.  What were your thoughts on them?
BR:  I found the experience very exciting.  Here were many young people with so much talent, eager to make it in the opera world.  I loved hearing them and watching their enthusiasm. I felt a certain sadness too, knowing that not all of them would be able realize their dreams.

OI:  Have you been attending the auditions long?
BR:  Actually not.  For a long time I thought about becoming involved but I was not quite sure how to go about making it happen.  Last year when I attended the final auditions at the Metropolitan Opera I happened to be sitting next to a woman who is heavily involved.  I told her of my interest and she gave me the information I needed.

OI:  So you are going to the finals this year?
BR:  Absolutely.

OI:  Do you go in a group or on your own?
BR:  I attend with a friend who is deeply interested in opera as well.

OI:  How long have you been going to the finals?
BR:  At least six years.

OI:  What are your other opera activities that you have planned?
BR:  I will be attending all of the HD Operas shown in movie theaters this year.  I will also be attending operas at the Metropolitan Opera House.  What I find particularly valuable is the opportunity to watch opera in these two ways.  HD provides the wonderful experience of seeing the singers close up, their emotions visible in a way that enables you to feel and know what they are experiencing.  In the opera house itself, you have a wider view of the stage, of all that is taking place at all times.

OI:  Do you have any favourite performances?
BR:  It is difficult for me to pinpoint one over another.  Each has something unique which resonates with me.  I would have to say that more than fewer are my favorites.  The quality of the performances are topnotch.  Each time I attend I hear myself saying "this is wonderful, this is the best".

OI:  Do you like the modern, more minimalistic productions?
BR:  Not always, but I do attend them out of a curiosity about what is being created, who the new talents are, what they have to say.  As an example, The Last Emperor was one of the most exciting pieces of theater and music I have seen and heard.  The music, the singing, the choreography were formidable.  Nixon in China, Dr. Atomic to name some others were outstanding.

OI:  How did you like that one?
BR:  I liked it very much.  I am extremely fond of Baroque music.  It was very sensitively performed.

OI:  You know so much about singing; it’s wonderful.  Is there anything else you would like to add.
BR:  I find that as the years go on my love for opera increases.  My enthusiasm never wanes.  It is a medium that gives me so much pleasure.  If there was to be "another life" for me, mine would be as an opera singer.