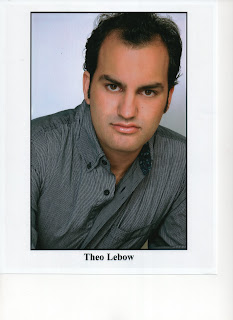 Theo Lebow, 25 and a Tenor, is our West Coast contestant, having been born and raised in Santa Monica then Sierra Madre, California. Mr. Lebow currently lives in New York, studying at Mannes College in his first year of the school's Professional Studies Diploma.

Coming from a strong musical background (his father is a classical cellist), Mr. Lebow was enrolled in a couple of children's choruses, one being in an Episcopal Church Choir and the other being the L.A. Children's Chorus, which has a strong connection with the opera. Therefore we will find that Mr. Lebow's first opera performance occurred in Tosca when he was 11 years old.


In addition to choirs and operas, Mr. Lebow has some soundtrack recordings to his name as well as a Democratic National Convention wherein he was handpicked in 2000 to sing a solo performance of "There's a Hero" for Al Gore's presidential campaign. (Despite the performance, George W. Bush ultimately won the controversial election).

Opera Idols: Do you have a favorite opera/aria/composer?
Theo Lebow:  Falstaff...I have a strong sentimental connection to it, since I just performed it in May. It was such an amazing experience especially since it was at school and I was performing with all of my friends!
OI: Any advice to future auditioners/opera singers?

TL: Have fun and do not, whatever you do, second guess yourself. You are always a work in progress and the most important thing is to enjoy what it is you are doing.

OI: What have you enjoyed about these MONC ER auditions?
TL: I am just happy to be in the regional finals and that the judges saw something in me that they liked. I loved singing for the audience as well!

OI: Do you have any preparation or post-audition rituals or techniques?
TL: Anything electronic helps me to mentally relax before and after an audition, like playing a video game....My friends are also a wonderful source of support. My teacher is always a tremendous help; in addition to being one of the most optimistic and supportive people I know, we did a 7-minute meditation today which really calmed me down.

Posted by Sylvanna VanderPark at 6:00 AM