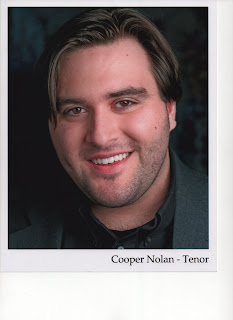 Cooper Nolan, 25, a Tenor, from Ft. Lauderdale, FL is whom I would call our Reluctant Opera Singer. Despite loving his time as a choir brat, Mr. Nolan did not quite take it seriously as a path of study for himself. Even while he attended the University of Florida (Political Science undergraduate major), he was participating in the school choir and his Director (Ronald Burrichter) questioned him as to why he was not studying opera singing full time. Mr. Nolan's response was "who majors in opera?" and went on to earn an Music Education degree instead. In the meantime, he continued to study, and says he learned a lot just by listening to opera singers perform. Finally, at the age of 22, Mr. Nolan succumbed to his talent and enrolled in the Manhattan School of Music, and quite delighted to have reached this far in this elite competition.

Opera Idols: Do you have a favourite opera/aria/composer?
Cooper Nolan: I started off with Pavarotti, he was a great introduction, and I've really enjoyed listening to other singers since.

OI: Do you come from a musical family? Any singers?
CN: I am the sole singer and musician in my family.


OI: Any advice to future auditioners/opera singers?
CN: Your voice is good enough. You are good enough to do this. If you've been called to it and enough people tell you that you are good, you are.  Don't try and sound 40 when you are 20 .

OI: Any highlights during these MONC ER auditions?
CN: When my audition is over... A lot goes into the audition so it is really nice to unwind afterward.

OI: Do you have any techniques to relax after an audition?
CN: Being with friends, and being with my girlfriend Lori Guilbeau (a 2010 MONC winner).