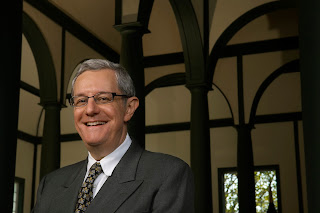 When Mr. Cera came to register as an audience member he just happened to mention that he traveled in from Toronto, which is my hometown, and so we struck up a friendly conversation. It may surprise some but my experience has demonstrated that Canadians are not always friendly towards Canadians outside of Canada. During our chat I found out that he had spend 20 years of his life in the US. It was a delight not only to connect with another fellow Canadian (Ileana being the "other Canadian" in this case) but to also learn of his prominent role in the industry as well as receive his feedback for this article.

*********************
Stephen Cera served as the Artistic Director of the distinguished Concert Season in the George Weston Recital Hall at the Ford Centre for the Performing Arts in from 1991 to 2000.    The series presented the Canadian and/or recital debuts of an array of world-renowned classical artists, including soprano Dawn Upshaw, mezzo-soprano Anne Sofie von Otter, and violinist Maxim Vengerov, as well as the final recital appearances of such artists as Mstislav Rostropovich, Leontyne Price, Marilyn Horne and Elly Ameling.

From 1985 to 1991, he was a Producer with CBC Radio Music, and closely involved  with CBC’s special coverage of the 1988 production of Wagner’s Ring cycle from the Bayreuth Festival in .  Before joining the CBC, he served for seven years as the Music Critic of the Baltimore Sun.  His commentaries on music have been published in The Wall Street Journal, Congressional Quarterly, the Los Angeles Times, and Musical America, as well as the National Post and Maclean’s magazine.


Opera Idols: Are you local or did you travel in from afar? If from outside NYC, how did you enjoy your visit? What else did you get up to in the city?


Stephen Cera: Though I've lived much of my life in the U.S., I currently reside in Toronto, and traveled to the Met auditions from there.  As always, I had a wonderful time in New York, whose atmosphere is uniquely stimulating, friendly and welcoming.  While in the city, I also attended "Porgy and Bess" on Broadway, which I thoroughly enjoyed -- especially for the riveting performance by Audra McDonald as Bess.  As well, I heard the very talented, 13-year-old violinist-daughter of a close friend from Montreal, who performed in Carnegie Recital Hall (Weill Hall) as a result of winning a competition.

OI: Did you come to see anyone in particular? If so, who and what is your connection?
SC: I attended the National Council Auditions (Easterm Region Finals) especially to see and hear a remarkable young tenor, Theo Lebow, whom I have known almost since he was born.  He is the son of one of my closest friends, Roger Lebow, from Los Angeles.  A few weeks ago, Theo sang in the Richard Tucker Foundation's annual gala at Avery Fisher Hall, in a performance of the final sextet from Verdi's "Falstaff" with Bryn Terfel, Stephanie Blythe, and Angela Meade, among others.  That he proved himself worthy to sing alongside such stellar artists, says it all.  I am immensely proud of him and believe his future will be bright.

OI: Have you attended these auditions in the past?
SC:  I think this was the first time I have attended these Met auditions.  However, I did see the superb 2009 documentary "The Audition", by Susan Froemke, in a movie theater in Toronto.  It provided a compelling and multi-dimensional introduction to the world of the Met auditions, and of course the great work done by everyone involved to provide vitally important career opportunities to deserving young artists who are ready for them.

OI: What are your impressions of the talent showcased this year?
SC:  I was very impressed by the talent that performed this year.  One always learns from talent;  it was inspiring to see and hear members of a younger generation of singers who displayed such ability and dedication.  It gave me a lot of hope for the future of the art form we love.   Aside from Theo, I was especially impressed by D'Ana Lombard, a young soprano from Garden City South, New York, who sang Bellini to the manner born, and also performed a beautiful aria from Korngold's "Die Tote Stadt".

OI: As you are in the music industry, any advice for aspiring young talent?
SC - My advice for aspiring young talent is this:  work hard, but not too hard; enjoy life;  keep your eyes and ears open to the world around you (...not just the world of vocal music); be flexible; and welcome new opportunities, however unexpected they may be.
Posted by Sylvanna VanderPark at 6:00 AM