Three years ago I liked opera, but I did not love it yet like I do now.  I had tested the waters with the classics; I knew my Verdi from my Puccini and my tenor from my baritone... but that was about it.

What I hadn't heard yet was any Wagner.  His operas have its own type of voice (the Heldentenor), he created his own type of music instrument (the Wagner Tuba), and he built his own theater (Bayreuth Festspielhaus, in Bayreuth, Germany).  Regarding his music, all I knew was that you are either for or against, especially when it comes to Der Ring des Nibelungen.  What better way to find out than actually attending a performance.

When I first decided to attend it was the spring of 2009, and one of the last times Otto Schenk's production of the Ring would be performed.  This was an enormous production, much beloved by opera buffs around the world, which had done good duty for the last twenty odd years.  In two years time (2012), there would be a brand new Ring.

Attending this cycle (= Das Rheingold + Die Walküre + Siegfried + Götterdämmerung) was a last-minute thing, so I practically had to hunt for tickets.  I learned soon enough Ring tickets are a hot commodity, especially when Maestro Levine is conducting and Placido Domingo is tackling the role of Siegmund.  True Wagner fans buy their tickets the minute they become available.

I remember buying one from a couple in their mysterious apartment on the West Side and I bought one of the last tickets for sale at the box office for Die Walküre.  I was seated in the nook of the house, right above the stage.  I always like to explore different seats to see which one is best, and that was not one of them.

But that didn't matter because the performance enthralled me.  A good indication whether I like a performance or not is how fast time goes, and time flew by.  This is especially telling when you consider the fact that the average length of each opera is more than four and a half hours.

To enthrall people for so long you not only need beautiful music, but also an interesting story; and the Ring does not disappoint.  Soap operas pale in comparison to the story line Richard Wagner came up with for his masterpiece.

Richard Wagner started working on the first part of the Ring after he finished work on the other three parts.  He knew how he wanted the story to end, so he worked backwards from that idea.  Das Rheingold is the shortest of the four operas at two and a half hours, but it is vital to the story as it forms a prologue to the events that follow.

Das Rheingold (The Rhinegold) is set in the realm of the gods.  They rule the universe, but greed and the lust for power brings an end to that.  Most of the major characters are introduced, and the struggle for possession of the ring begins.  This opera sets in motion what will eventually cause the demise of the gods.

Das Rheingold is just as important from a musical standpoint.  The music tells you so much more than just what you see on stage.  Wagner accomplishes this mainly with the use of Leitmotifs.  He conceived this concept where characters and objects are represented by a specific musical theme which is repeated throughout the whole Ring (in an adapted version over time).  Every character in the story has its own Leitmotif, but the best example of this method can be found in Die Walküre.  "The Ride of the Valkyries" is probably one of the most recognizable pieces of music.  If you don't know the name, you will definitely recognize the music ones you hear it.

Every time one or all of the Valkyries are interjected in the story, an adaptation of this theme can be heard. There are hundreds of these leitmotifs throughout the Ring, and the more you listen to it, the more you will recognize the different tunes.  For me, it allows me to see the whole thing in my mind even when I am just listening on my iPod.  It is very important to see the whole Ring, if only to see the progress of the Leitmotifs throughout all four operas.

The Valkyries are of course the main subject of the second opera, Die Walküre (The Valkyrie).  Wagner called it the First Day.  It is set in the realm of the humans and the gods and lasts about 5 hours.

At this point the characters become very confusing, and it is very important to read up on the story before you go watch it.  The MetOpera set up this amazing mini-website where you can find out all about the Ring.  I used all this information to create my own little Ring Survival Guide, and I made a little 'family tree' to keep all the characters apart.  No matter how much I love technology, for certain things pen and paper are still the best bet. 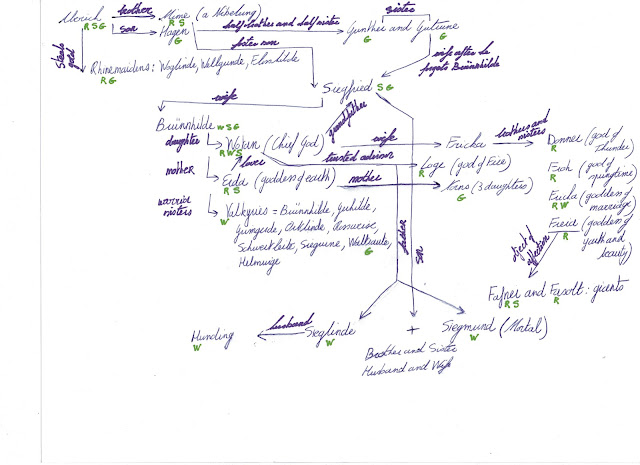 Siegfried is set during the Second Day, and the world of the gods is more and more forgotten as we start focusing on the humans.  The whole point of the Ring performances of the last two years was to introduce the new production by Robert Lepage.  There has been a lot of talk about this production, and not always in a positive light.  The set is basically made up of 24 revolving planks, on which projections are made.  Some of these projections are 3D (for which you don't need glasses), including the little bird who informs Siegfried that there is a beautiful woman somewhere on top of a mountain surrounded by fire.  I had to look twice to make sure this was not a real bird flying across the stage, but it didn't really matter because this part has some of the most beautiful melodies you can imagine.  I felt ready to soar into the sky.

The concept was born in the mind of Robert Lepage, who has also made many Cirque du Soleil shows.  Yes, the planks creak a little as they twist and turn.  Yes, the stage is a little static sometimes and doesn't always perform as well as it should, but it is all about the music.  And the scenery reacts to the music.  Water turns to blood as Siegfried slays the dragon, the flames soar higher as Siegfried approaches Brünnhilde and the water ripples as the Rhinemaidens surface to play.

I think the machine works best on the Third Day, Götterdämmerung (Twilight of the Gods).  By now the world of the gods is about to demise, and the whole 5 hours and 50 minutes are spent on earth, near the Rhine, the only constant in all four operas.  Götterdämmerung is the only one that features a chorus, an indication that the story has been changed from a few gods to the realm on earth.  It seems like every little detail in the Ring has meaning, so it is no wonder many books have been written about it.

I personally like the new production.  It has so many surprises that kept me on the edge of my seat.  I sat enthralled for all 19 hours, and I forgot all about the world around me.  It was like a dream.  I always get completely immersed into the performances I am seeing, and I forget everything around me, sitting in my seat like a statue.  The whole production came together in Götterdämmerung, with the exception that the ending was not explosive enough.  They could have found a better way for Brünnhilde to 'jump' into the fire and for Valhalla to be destroyed.  I was sitting up quite high, which gave me an amazing view of the gold ceiling that lit up in a beautiful red glow of the fire surrounding Brünnhilde.  I almost felt the heat of her love and the fire.

Of course, one advantage of seeing a performance at the MET is the stellar cast you will be sure to see perform.  The Ring did not disappoint.  Unfortunately, Maestro Levine was not able to conduct (he is a master at conducting Wagner), but Fabio Luisi was a perfect replacement.  Of course, it is every conductor's dream to work with the MET Orchestra.  The Orchestra is huge for the Ring, and the pit is filled to the brim.  I don't know anything about the technicalities of singing opera, so the only credentials I have to critique the singers is my subjectivity.  For that reason I can just say they were all amazing, from Jay Hunter Morris (who came to the role by accident) as Siegfried to Deborah Voigt as Brünnhilde.  And of course, some of the singers have graduated from the Lindemann Young Artist Program and participated in the Auditions.  I hope to one day be able to applaud Will Liverman or Ricardo Rivera.

Now, there is still a chance to see the new Ring, and you can buy tickets for the full Ring Cycle at www.metopera.org.  There is nothing like seeing them all together, you just have to be prepared.  Sitting at the MET for 6 hours is a long time, even for a die-hard Wagnerian.  In 7 hours I can fly across the ocean and be home in Belgium.  I always have a few things that make this adventure enjoyable, but I think you can apply them to any opera.