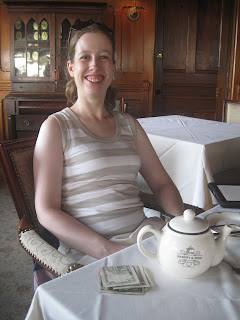 I have been an opera lover for many years, and living within walking distance of the Met Opera has made me a little spoiled.  It is definitely one of my favorite places in NY, with the exception of the Metropolitan Museum.

I have been a Young Associate at the Met Opera for many years, and when they reached out to members to find new people to help organize the Eastern Region Auditions, I jumped at the chance.

I had seen the Auditions documentary, and I had often seen the little star next to singers' names in the Playbill marking them as National Council Winners.  I had also been to the Grand Finals the last two years, and I often wondered where the finalists came from.

Little did I realize when I was watching the Finals in March of last year, I would be helping a wonderful team of volunteers just two months later in setting up the next auditions.

My biggest responsibility in the audition process was being in contact with the singers.  It was great developing a relationship with everyone over the months, from answering wardrobe questions to changing aria lists and switching audition times.  When I will see Ricardo Rivera and Will Liverman (our two finalists) on the Metstage (during the Semi-Finals and hopefully during the Grand Finals) I know I will feel a sense of pride.

I thought it would be interesting to help out young singers at the start of their careers as they advanced from the District Auditions, through the Regional Auditions, followed by the Semi-Finals and the Grand Finals.  I find it fascinating to organize something with so many different facets and then watch it all come together.  It feels like setting up an opera itself.  When you walk backstage through the MET, you see sets in different locations, and costumes strewn about and you wonder how they even manage to find everything.  Yet, when you take your seat and the curtain opens, it all comes together.  It's like a kitchen in a big restaurant.

I love opera, and listening to all these different voices is a training for me.  I never realized one aria could be sung in so many different ways, one more moving than the next.  Just for this specific reason, I don't really have a favorite singer; I just want them to be dramatic and really great actors on top of being a great singer.  I would insert Maria Callas here (not that I ever saw her perform live), but she was not always the most amazing singer.

It will probably sound cliché when I tell you my favorite opera and aria, but every time I hear something new I add something to the list.  I like Verdi for the whole and Puccini for its parts.

My favorite aria is Nessum Dorma from Puccini's Turandot.  It is this particular aria that made me go to the opera for the first time after seeing it in the movie The Sea Inside.  My favorite opera is Verdi's Nabucco.  I even listen to it while jogging.  I like the changes in rhythm and tempo, and it helps me in adjusting my running speed.

It just goes to show that opera can serve many purposes, and it is definitely not a lost art.
Posted by Unknown at 9:34 AM