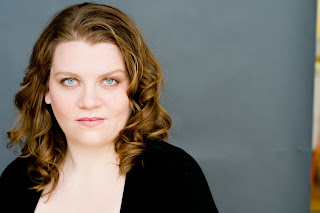 Ah Canadians. Always so pleasant. And with such international names! Ileana Montalbetti, 29, is our Prairie Soprano traveling from Saskatoon, Saskatchewan (via Toronto on a stormy Tuesday) to compete in the Big Apple.

It is no wonder that Ileana finds herself here today in the opera world with such an impressive pedigree...her mom was an opera singer and currently resides as Artistic Director of Saskatoon Opera. I am told that in her 20s, Ms. Montalbetti's mother received her formal training from the Hochschule für Musik in Vienna where she studied with American soprano, Arleen Auger. The performing genes do not stop here, as her father is a trained actor and her brother is training as an actor.

I was pleased not to sit down and chat with only Ileana but also her friends Yegor Shevtsov (pianist), and Jonathan Beyer, 2006 MONC National Finalist, and the resulting and highly entertaining banter may deem a separate blog entry.
Opera Idols: Do you have a favourite opera/aria/composer?
Ileana Montalbetti: Mozart, I've sung a lot of Mozart, although now I am moving more into the Germanic repertoire. I am currently a young artist with the Canadian Opera Company in their training program...in my fourth year and finishing this Spring. I have my debut next year with the Edmonton Opera Company where I will perform Antonia in the Tales of Hoffman. I also just returned from Rome where I performed Fifth Maid (the one they kill) in Strauss' Elektra. My dream is to perform in Wagner's Die Walküre.

OI: Any advice to future auditioners/opera singers?
IM: Stay hydrated and rested, especially if you are traveling

OI: What has been your impressions of these MONC ER auditions?
IM: I have to say that these auditions are very well organized and ahead of time. Everyone is really friendly. And I love being in New York.

OI: Do you have any techniques to relax after an audition or any preparation methods on the day of an audition like this?
IM: Post-audition...watching mindless TV so that I can stop thinking and analyzing about my performance!