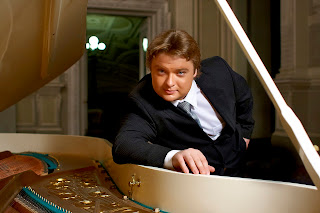 Mr. Antipenko, 27, and a tenor, hails from St. Petersburg, and was our second Russian contestant of the day. From the tender age of 6 years old, Viktor commenced his musical vocation when he went to study at the famous Glinka Choral College in St. Petersburg. However, his initial education was as a choral conductor and moved on to study at the St. Petersburg Conservatory for the same. Eventually he came to sing in the Mariinksy Opera House in the chorus and it was at this point that he realized that he had to choose between being a singer or conductor, and he chose to become a singer. By this time Mr. Antipenko was 18 years old, and so marked the beginning of his opera singing career.

A few years after making his decision, he earned small solo roles in productions with conductor Valery Gergiev at the Mariinsky Hall (St. Petersburg, Russia), in the Barbican Center (London, UK), in the National Center for the Performing Arts (Beijing, China) and at the Red Sea Music Festival (Eilat, Israel).

In total, Mr. Antipenko worked with the Mariinsky for seven years as part of the chorus, at which point he made another decision: to switch from being a choral singer to a soloist. Following the American Dream, he visited New York on a summer vacation where he auditioned for his now vocal teacher Bill Schuman. Having heard a lot about the Philadelphia Academy of Vocal Arts, one can imagine Mr. Antipenko's delight when Mr. Schuman urged the young singer to audition to for a placement in the Academy. And it paid off - Mr. Antipenko was accepted in November, in the middle of the school year.

Now in his third year as Resident Artist at the Academy, Mr. Antipenko chuckles with delight as he tells me that when he arrived in New York, he could not speak a drop of English.

Opera Idols: Do you have a favourite opera/aria/composer?
Viktor Antipenko: No opera in particular, but I love passionate music: Verdi, Puccini, Russian composers Rachmaninoff, Tchaikovsky. My dream is to perform Gherman in The Queen of Spades

OI: Do you come from a musical family? Any singers?
VA: No, I am the first in my family to sing.


OI: Any advice to future auditioners/opera singers?
VA: Just study, never stop, and you have to always analyze and stay on top with your technique, your vocals. I am always thinking of what I'm listening to, thinking about what the singers are doing, and I'm always listening to old-style singers. Today all of us really have much to learn from them.

OI: How do you feel about the experience that these MONC ER auditions have given you?
VA: This audition is the first piece of the puzzle to achieving the dream to sing on the Met Stage, but not sure yet how it will unravel.

OI: Do you have any techniques to relax after an audition?
VA: No, I do not have a technique to relax...I am a very passionate person...it just takes time to relax. But I do have hobbies...while I was in Russia I engaged professionally in sailing (regattas) and was preparing to take the exam to become a Pilot. But now, of course, all my time focused on learning (singing). I hope that one day I'll continue my hobby.