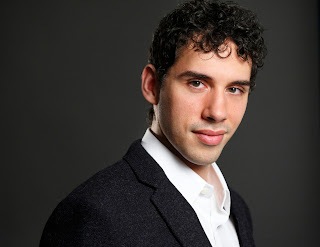 By the time I had made my way to my last interviewee, the winners were being announced. I managed to jot down that Ricardo, 29, was from Ronkonkoma, NY and a Baritone. Then I lost him and about a half hour later, I had a very happy man who was understandably a little breathless to interview. I guess it was the year for Baritones.

Opera Idols: How did you become an opera singer?
Ricardo Rivera:  My ultimate goal in performing is to put audience members in touch with a part of themselves that, in this modern life, they might have become disconnected with: their spiritual side. I am lucky to be able to sing great Music, because great Music, like all great Art, has the divine in it. I don't mean this in a religious sense, I mean it in a psychological, feeling, and spiritual sense.


I sang in choir and in school musicals throughout my primary and secondary school education. I decided to study and train for classical singing because I knew that was a healthy way to approach singing; little did I know the personal growth that studying and singing great Music would bring me.


After High School, I auditioned for many music schools but did not get into any of them. I then moved to New York City and entered the Mannes College Extension Division, which is the adult student division of Mannes College the New School for Music. I trained there for one year with a voice teacher, Lois Winter, who helped me to figure out my passagio. I also coached, intensely, my audition repertoire . After this, I then again auditioned for music schools. Because of my training in the Extension Division, in these rounds of auditions, I was successfully accepted into many of the schools I auditioned for.


Because of recommendations from various people and its reputation as a place with a nurturing environment, I decided to attend the College Division of Mannes College. This is my ninth and last year at Mannes. I hold BM and MM degrees and I'm in my second year of the Professional Studies Diploma program. The Conductor and Artistic Director of Mannes Opera, Joseph Colaneri has been a superlative teacher and generous supporter of mine. He has been a GREAT source of learning, inspiration, and growth. He also gave me the opportunity to sing Don Alfonso in Mozart's "Cosi fan tutte", Ford in Verdi's "Falstaff", and now this year, the title role in Mozart's "Don Giovanni".


Arthur Levy has been my vocal instructor for the past 8 years. With his extremely process orientated and intelligent, humanistic approach and deep knowledge of vocal pedagogy, he has taken me from having an uneven voice four times as small as I now have, to having developed to the point where I can fulfill my artistic goals.
Opera Idols: Do you come from a musical family? Any singers?
RR: My mother likes to sing around the house and according to my family, my great-great-great-etc. Grandmother sang at the Metropolitan Opera.

Opera Idols: Do you have a favorite opera/aria/composer?
RR:  Ultimately, it doesn't matter what role I am singing as long as I prepare and develop a personal relationship with that given role. But in general, I like to play evil characters and/or characters who are twisted in someway. I find that these make the most interesting characters to portray. For example, Don Giovanni, whom I look forward to presenting in May!
When the time is right, I look forward singing more of the Verdi Baritone roles.

RR: You should take and process information about style, language, performance practice, stage deportment etc., from people that you trust: voice teachers, coaches, conductors, directors, etc., but it is important to then form your own opinion about the music you are singing and, if you haven't already done so, start discovering what kind of artist you are. Being a generic singer/performer is something that you should avoid. The opposite of generic is exciting.  Some of the ways in which you can be exciting are by using expressive diction, incisive rhythms, a sense of urgency in your voice and acting ("What I am saying is really important!"), different vocal colors, well-planned phrasing, and where and how often you breathe. Ask yourself and experiment with discovering the answer to: What do you want to express with the music you are singing? Pick arias that not only suit your voice/fach but also your temperament. What do you love to sing? You should learn a lot from exposing yourself to and listening to other singers, but ultimately, what you want to do is know what your version of the aria and/or role you are singing is. The sooner you begin this process, the better.


OI: What have you enjoyed about these MONC ER auditions?
RR: I was so happy when I got to this round and even happier when I won 1st Place in the Eastern Region. Also, Merkin is a nice, resonant hall to sing in, it was really great to have an audience today, and the judges intelligent feedback was much welcomed.

OI: Do you have any preparation or post-audition rituals or techniques?
RR:  The day before and the day of the audition, I like to go through the arias both mentally and physically to remind myself of the ideas, musical and dramatic/physical, that I plan to execute. This morning, I felt a tickle in my throat so I drank Throat Comfort Tea and steamed my voice with a personal steamer.

Posted by Sylvanna VanderPark at 6:00 AM